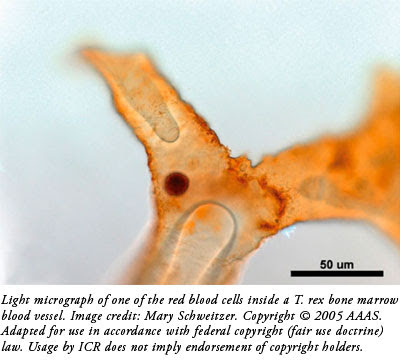 “Bad news, Jurassic Park fans—the odds of scientists cloning a dinosaur from ancient DNA are pretty much zero. That’s because DNA breaks down over time and isn’t stable enough to stay intact for millions of years. And while proteins, the molecules in all living things that give our bodies structure and help them operate, are more stable, even they might not be able to survive over tens or hundreds of millions of years. In a new paper published in eLife, scientists went looking for preserved collagen, the protein in bone and skin, in dinosaur fossils. They didn’t find the protein, but they did find huge colonies of modern bacteria living inside the dinosaur bones.”

They did not mention their opponents as creationists, who have whittled away the long agers that make evolution possible.

They museum folks published their results in eLIfe, which writes that it seems exceptional that original proteins could persist for so long.

Soft tissue has been found in dinosaurs, salamanders, dinosaur eggs, an ichthyosaur, an Archaeopteryx feather, mammoth bones and many Cambrian creatures.