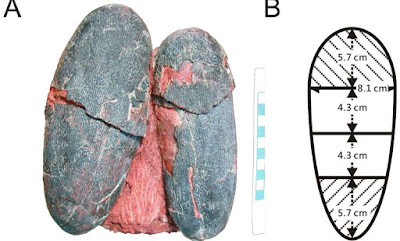 Darwin’s theory never predicted the discovery of soft tissue in fossils assumed to be tens if not hundreds of millions of years old.

Yet hardly a month goes by without the news of original protein or some sort of unfossilised bone being dug up.

We would definitely not expect to find so old soft tissue.

A paper recently published in the journal PeerJ features the discovery of original pigment in a Late Cretaceous (i.e. “70–66 million year” old stratum).

According to the abstract,

“The eggshell parataxon Macroolithus yaotunensis can be assigned to the oviraptor Heyuannia huangi based on exceptionally preserved, late developmental stage embryo remains. The analyzed eggshells are from three Late Cretaceous fluvial deposits ranging from eastern to southernmost China. Reevaluation of these taphonomic settings, and a consideration of patterns in the porosity of completely preserved eggs support an at least partially open nesting behavior for oviraptorosaurs. Such a nest arrangement corresponds with our reconstruction of blue-green eggs for oviraptors. According to the sexual signaling hypothesis, the reconstructed blue-green eggs support the origin of previously hypothesized avian paternal care in oviraptorid dinosaurs. Preserved dinosaur egg color not only pushes the current limits of the vertebrate molecular and associated soft tissue fossil record, but also provides a perspective on the potential application of this unexplored paleontological resource.”

Pigment has been found in even “older” fossils.

The expression ‘fluvial deposits’ almost always refers to burial by an abundance of water. The most likely period for this was the global flood that devastated the early earth in Noah’s days.