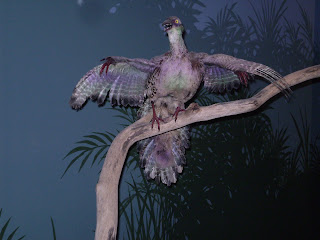 Archie is one of the best-known icons of evolution.

After 150 million years, feathers should by no means be soft. However, a new study published in the Proceedings of the National Academy of Sciences claims that this has happened. An international team of researchers used the synchrotron rapid scanning X-ray fluorescence (SRS-XRF) method to take a closer look at Archaeopteryx and noticed that Archie’s feathers were still unfossilized.

The first Archaeopteryx fossil was found soon after Charles Darwin published his On The Origin of Species in 1859 and it became one of the best-known icons of evolution.

The fresh study caused the popular press to see birds as the descendants of dinosaurs although Archie is assumed to be much older than T. rex. New Scientist for instance pointed out that the Archaeopteryx bone has the same minerals – copper and zinc – as modern birds.

Such observations do not have much to do with bird evolution.

It would be more pertinent to discuss how a feather can retain its softness for 150 million years.

Like soft tissue in dinosaur bone, Archie’s feather suggests that it cannot be as old as evolutionists assume it to be.