Has Noah’s ark been found? 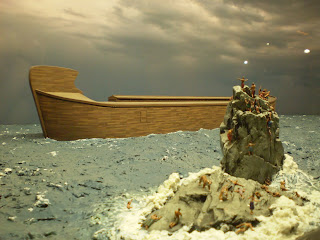 
A team of Chinese and Turkish explorers say they have found the remains of Noah’s ark on Mt. Ararat. Members of the Hong Kong based Noah's Ark Ministries International found wooden structures on the mountain at an altitude 4, 200 metres (14, 000 feet).

Noah's Ark Ministries International held a press conference in Hong Kong on April 25 and released photos and a video of the discovery.

But as many biblical creationists criticised the assumed discovery, they took down the video.


The explorers say they took a sample of the wood and dated it at 4,800 years, which roughly corresponds to the biblical date of Noah’s flood.

However, not all creationists are convinced that the ark has really been found. Both Answers in Genesis and Creation Ministries International call for the need for further research. Archaeologist Randall Price at Liberty University and biologist Todd Wood of Bryan College also take a critical approach to the discovery.

The flood of Noah’s day was a global catastrophe that left marks everywhere in the world. Mass graveyards, fossils of sea creatures on high mountains and flood legends in every culture testify of a genuine, world-wide cataclysm that destroyed all land-based life outside the ark.

Noah's Ark Ministries International website. (They have obviously taken it down.)

It has become obvious that Noah’s Ark has not been found. You can read a detailed explanation here.
Lähettänyt bwanajoe klo 23:49