Aquifers in the Atlantic – Might Speak about Noah’s Flood 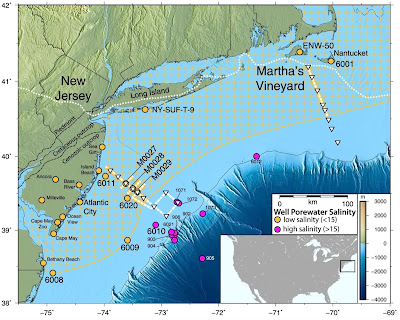 A new study shows that there is a gigantic freshwater aquifer below the Atlantic ocean.

While the aquifer's exact size is still a mystery, it may be the largest of its kind, taking up a region stretching from at least Massachusetts to southern New Jersey, or 350 kilometres (or nearly 220 miles). The area includes the coastlines of New York, Connecticut and Rhode Island. This aquifer may contain about 2,800 cubic kilometres (670 cubic miles) of slightly salty water.

The study was published online June 18 in the journal Scientific Reports.

There is a more special emphases for this, the flood of Noah’s days has also left acquifers (huge lake under the Andes, the semi/deserts of Northern Kenya, ice river flowing below the ice in Greenland.

Yes, popular scientist are asking: Does Earth make its own water?

When we take a look at God’s book of guidance –- it is very possible it does.