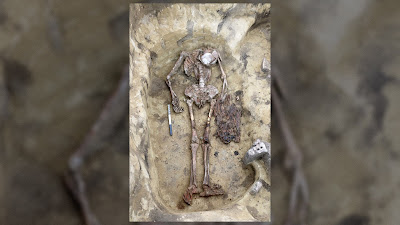 Image courtesy of The Siberian Times.

Evolutionists think that humans have come from humble beginnings to reach top society. However, science shows that even in the beginning, humans had the will to decorate themselves.

Recently, an iceman was found in Siberia:

"Archaeologists have unearthed a Bronze Age skeleton that was buried with an unusual garment: a collar or headdress made of dozens of bird beaks and skulls.

The so-called birdman's remains, which date to about 5,000 years ago, were discovered at the Ust-Tartas dig site in Siberia's Novosibirsk region, The Siberian Times reported.

The 30 to 50 bird skulls and long beaks were arranged underneath the human skull, "laid as if they meant to cover the neck like a collar," Lidia Kobeleva, a researcher with the Novosibirsk Institute of Archeology and Ethnography in Siberia, told The Times in a video."

The iceman had company. a grave found nearby, with two children and an adult male.

Even the Neanderthals wanted to decorate themselves, and
other primitive societies were not so primitive at all. And also Stonehenge tells us that early man was cleverer than we thought.