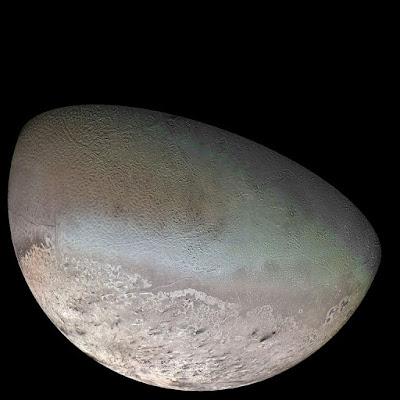 Nowadays, the planets and their moons surrounding the Sun all seem to be very much less than the 4.5 billion years assigned for them on the scale that most scientist use to compute the age of them.

Now, this tendency has also reached Neptune's moon triton. A recent article in Phys.org about the moon says:

“Astronomers using the Gemini Observatory explore Neptune's largest moon Triton and observe, for the first time beyond the lab, an extraordinary union between carbon monoxide and nitrogen ices. The discovery offers insights into how this volatile mixture can transport material across the moon's surface via geysers, trigger seasonal atmospheric changes, and provide a context for conditions on other distant, icy worlds.

Extreme conditions can produce extreme results. In this case, it's the uncommon pairing of two common molecules—carbon monoxide (CO) and nitrogen (N2)—frozen as solid ices on Neptune's frigid moon Triton.

It is the only large moon in the Solar System that orbits ‘backwards’ or in the opposite direction to its planet's rotation. The peculiar motion suggests that Triton is a captured trans-Neptunian object from the Kuiper Belt—a region of leftovers from the Solar System's early history, which is why it shares several features with the dwarf planet Pluto and Eris: size (roughly two-thirds that of our Moon), and surface temperatures that hover near absolute zero; so low that common compounds we know as gases on Earth freeze into ices.”

The article does not say who old Triton is, but it only states that the two molecules – carbon monoxide (CO) and nitrogen (N2). – are frozen on the moon.

Even Pluto and Erin and Makemake are also young.

Moreover, a dwarf planet orbiting the sun some 2 billion kilometres beyond Pluto would have a ring that suggests young age.