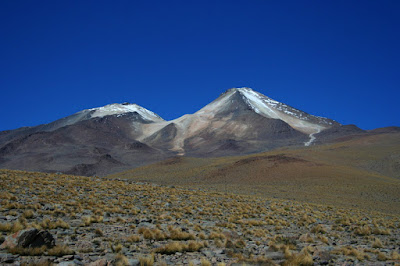 Doubters often question the historicity of Noah’s Flood although many geological features testify that it was a real catastrophic event.

These monuments formed by the Flood can be seen all over the world, for instance in Cape Verde, Norway and Australia.

New research published in the journal Earth and Planetary Science Letters suggests that there is a lot more water below Earth’s surface than we previously thought.

In addition to aquifers and water trapped in ringwoodite, it seems that our planet also hides an enormous subterranean lake below the Andes.

Jon Blundy of the University of Bristol, UK, and his colleagues discovered “a massive reservoir of water”.

According to New Scientist, they “made the discovery while studying a huge ‘anomaly’ 15 kilometres beneath the currently dormant Uturuncu volcano in the Bolivian Andes. The anomaly, called the Altiplano-Puna magma body, slows down seismic waves and conducts electricity, unlike surrounding magma.”

To say that the researchers were surprised would probably be an understatement. Blundy and colleagues tested rocks excavated from the mountain and found that they contained 8 to 10 per cent water:

“The Altiplano-Puna magma body is known to be around half a million cubic kilometres in volume, so the researchers estimate it must contain a similar amount of water to some of the largest freshwater lakes on Earth. ‘It’s probably somewhere between Lake Superior and Lake Huron,’ says Blundy. ‘It’s a staggeringly large amount.’ ”

Lack of water is thus not a valid excuse for doubting the Flood.

The discovery also supports the view that there was subterranean water on Earth from the very beginning.