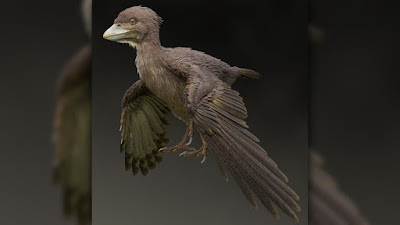 The bird fossil is l20 million years old, that’s what the experts say.

It is the size of a pigeon. it is named Fukuipteryx prima, and ”displays something found in modern birds that is absent in other early Cretaceous bird fossils: a bony plate near the tail.”

It was found in Japan. Like the Archaeopteryx that is the oldest known bird, Fukuipteryx had an unfused pelvis and a U-shaped wishbone: hallmarks of primitive birds. However, it is more primitive than the bird found in China, Jeholornis. or Eoconfuciusornis zhengi or the soft tissue fund in a 120 million years old bird.

That is what the experts say.