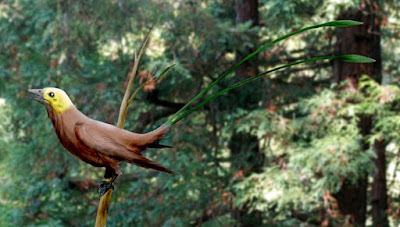 Bird evolution is a fascinating topic, as birds have hardly evolved since they “flew over the heads of dinosaurs,” as an article in Science Daily put it way back in 2015.

Some birds that are assumed to be “130 million years” old looked “startlingly like today’s” birds, as the journal Science acknowledged.

Dino-era birds come in many shapes and sizes.

Now, with the discovery of Eoconfuciusornis that Science Daily describes as “the most exceptionally preserved fossil bird discovered to date,” the non-evolution of birds is becoming even more obvious.

Reporting on the discovery of this bird that is assumed to be 130.7 million years old, Science Daily repeatedly pointed out its similarity to modern birds:

“This new specimen of Eoconfuciusornis, housed in the Shandong Tianyu Museum of Nature, in Eastern China, is a female. The ovary reveals developing yolks that vary in size, similar to living birds…

Eoconfuciusornis and its kin, like living birds, was able to cope with extremely high metabolic demands during early growth and reproduction.

Traces of skin indicate that the wing was supplemented by flaps of skin called patagia. Living birds have numerous wing patagia that help the bird to fly… Even more unique is the preservation of the internal structure of the propatagium which reveal a collagenous network identical to that in living birds. This internal network gives the skin flap its shape, allowing it to generate aerodynamic lift and aid the bird in flight.”

There is a major problem with the article, though. Its title “Scientists make new discovery about bird evolution” is highly misleading. It needs correction.

How about “Scientists make new discovery about the non-evolution of birds”?