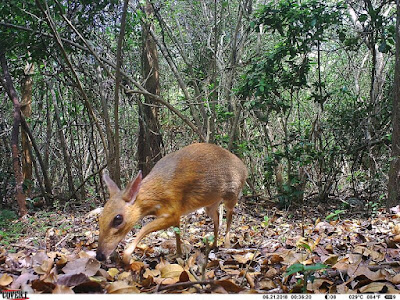 It looks like a part-deer, and scientist hadn’t seen it for almost 30 years.

"With the distinguishing silver line down its back that starts just behind its shoulders, the silver-backed chevrotain (Tragulus versicolor) looks a bit like a deer, but it's the size of a large house cat. The species is thought to be endemic to Vietnam and was first described in the early 20th century and again in 1990. Since then, the silver-backed chevrotain had been "missing."

Now it was found.

And the search party got 1,881 pictures of the species.

The chevrotain is a living fossil, it hasn’t changed for 34 “million years”.

The enormous number of living fossils should be an embarrassment to a theory (Darwinian evolution) that is often defined as change over time.