30 Years Since the Berlin Wall Came Down 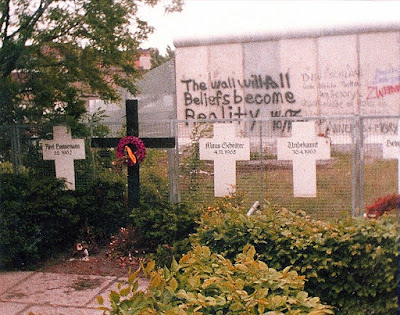 Image courtesy of Lyricmac, CC BY-SA 3.0. Memorial to the Victims of the Wall, Berlin in 1986.

When Germany was divided up by the aliens after World War II, and in 1961 the soviets found it necessary to keep East Berliners away from the west.

The wall was 140 kilometres (87 miles) long. In June 1962, a second, parallel fence was built some 100 metres (110 yards) farther into East German territory. The houses contained between the fences were razed and the inhabitants relocated, thus establishing what later became known as the death strip.

At least 140 people met their death, when escaping.

Just two years after the saying, the Berlin Wall came down. Thus the gate to keep the Berliners in East Berlin had failed, showing that the Orwellian history is over.