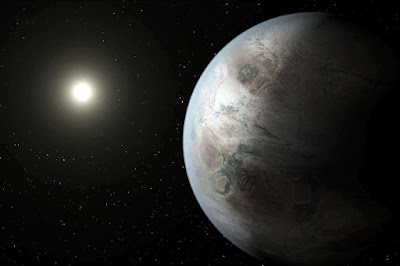 Kepler-452b is almost the only exoplanet that might to harbour life – and that is a maybe. Image courtesy of NASA Ames/JPL-Caltech/T. Pyle.

“We have found more than 4000 planets orbiting distant stars, but it turns out that probably none of them have the right conditions for life to evolve, making Earth even more special than we thought.”

“We normally consider a planet capable of hosting life if its surface is the right temperature for liquid water. This depends on how close it orbits its star – too far and any water will freeze, but too close and it will boil.”

But there are other ways of looking at exoplanets. for instance, complex life might require a very narrow habitable zone.

And then hot exoplanets challenge planet-formation theories, and our nearest exoplanet might be too hot.

Some planets are impossible they break secular planet forming theories.

The majority of exoplanetes don’t harbour life, for instance red dwarfs don’t do it. And the Sun and our big moon make our planet a welcome home.

And, then, the goldilocks zone is getting smaller.

One think that most near Earth investors do not find, is a lack of phoshorus (P), that is one of our planet’s general chemical elements. Without it we would not have RNA, DNA and even even not ATP, and thus we would not have life.

It is also a problem of seekers of extraterrestrial life.