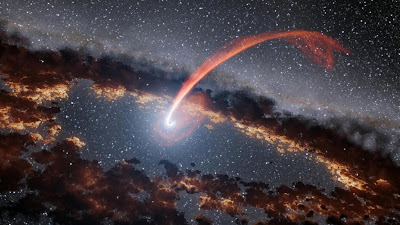 ”An astronomer at Columbia University has a new guess about how hypothetical alien civilizations might be invisibly navigating our galaxy: Firing lasers at binary black holes (twin black holes that orbit each other).

The idea is a futuristic upgrade of a technique NASA has used for decades.

Right now, spacecraft already navigate our solar system using gravity wells as slingshots. The spacecraft itself enters orbit around a planet, flings itself as close as possible to a planet or moon to pick up speed, and then uses that added energy to travel even faster toward its next destination. In doing so, it saps away a tiny fraction of the planet's momentum through space — though the effect is so minimal it's pretty much impossible to notice.

In a paper published in the preprint journal arXiv on March 11, David Kipping, the Columbia astronomer, proposed that an interstellar spacecraft could fire a laser at the gravity mirror of a fast-moving black hole in a binary black hole system.”

This research posits that alien life exists. However, we haven’t had a chance to look into it yet. Even the famous wow signal was false and the same goes for Tabby Star. Likewise, all subsequent attempts have been false.

All news from the aliens are bogus. The extra-terrestrial evidence doesn’t look like 'Oumuamua.

However, many intelligent people look on aliens are real. As they believe in evolution, they also seem to think that our solar system was not unique.