Proxima b: Nearest Exoplanet Might Be Bombarded With Intense Solar Flares 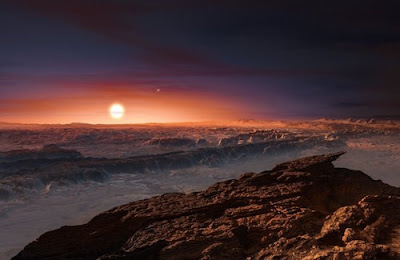 An artist’s impression of Proxima b. Image courtesy of ESO/M. Kornmesser.

Just over 4 light years away, Proxima b is the closest exoplanet we could get. What is more, astronomers think that it orbits its sun Proxima Centauri in the habitable zone where liquid water can potentially be found.

No wonder it has made overtly optimistic headlines.

However, it might be good to keep in mind that Venus and Mars orbit the Sun in its habitable zone, and look how friendly to life they are.

Proxima b has a mass that is at least 1.3 times bigger than Earth’s. It orbits its sun at a distance of 7 million kilometres, which is much closer than where Mercury orbits our sun.

As Proxima Centauri is a red dwarf, it is fainter and cooler and probably also more unstable than the Sun.

Nevertheless, some researchers believe that the planet could be habitable. According to Science Daily, it

“has an estimated surface temperature that would allow the presence of liquid water.”

But there are some big iffs:

“Despite the temperate orbit of Proxima b, the conditions on the surface may be strongly affected by the ultraviolet and X-ray flares from the star -- far more intense than the Earth experiences from the Sun.”

In other words, it might be a dead planet. With a year lasting only 11 days it is bound to be a world that differs enormously from what we are used to:

“Two separate papers discuss the habitability of Proxima b and its climate. They find that the existence of liquid water on the planet today cannot be ruled out and, in such case, it may be present over the surface of the planet only in the sunniest regions, either in an area in the hemisphere of the planet facing the star (synchronous rotation) or in a tropical belt (3:2 resonance rotation). Proxima b's rotation, the strong radiation from its star and the formation history of the planet makes its climate quite different from that of the Earth, and it is unlikely that Proxima b has seasons.”

While the discovery of potentially habitable exoplanets tends to make splashing headlines, further research has often shown that even the most promising cases, for instance Kepler 438 b and Kepler 452 b, have turned out to be far less habitable than once assumed.

Some life-friendly exoplanets, such as Gliese 581 d and Gliese 581 c, might not even exist.

Exoplanets tend to be weird. The ones we know about don’t resemble Earth at all.

Why, then, are some people so keen to find them?

The naturalistic /materialistic worldview needs them. It detests the possibility that humans are unique and wants to see aliens everywhere in the universe.