Evolution’s Enigma: How to Get DNA, Proteins and RNA at the Same Time 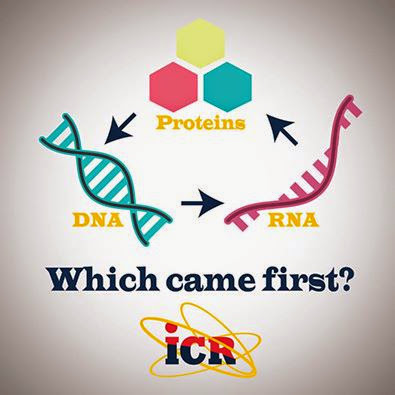 Image courtesy of the Institute for Creation Research.

Naturalistic explanations of how the cell evolved into such an efficient entity defy common sense. In a recent article in The Behemoth, biologist Ann Gauger outlines the problem:

Needless to say, their relationship is anything but simple:

“To replicate DNA, one protein unwinds the DNA, creating a fork with two strands; another protein duplicates the right strand of the DNA, while yet another casts off loops from the left strand so it can be copied. Meanwhile, thirty or so other proteins keep watch over the DNA, proofreading, correcting, and ensuring very few errors -- about one mistake per billion nucleotides copied.

In short, it's a chicken and egg problem: which came first, proteins or DNA? ”

“Even if that problem could be solved, another puzzle would remain: how the link between DNA, RNA, and protein came about. We know how it's done -- ribosomes -- but we have no idea how ribosomes came to be. Ribosomes are indispensable, efficient, self-correcting, decoding machines, and protein factories. They are made of many proteins woven together with RNA molecules into tangled knots that somehow work together to decode RNA. In fact, just deciphering into what shape those knots are tied won three scientists the 2009 Nobel Prize in Chemistry.

Born in the nucleus, ribosomes do their work in the cytoplasm. Messenger RNA (RNA copied from a protein-coding gene) finds a ribosome and begins feeding through like ticker tape. The ribosome reads the message and translates it into amino acids, stitching the amino acids together to make a protein.”

300 years ago King David penned the words ”I praise you because I am fearfully and wonderfully made; your works are wonderful, I know that full well.” (Psalm 139:14, NIV).

Recent discoveries in cell biology are beginning to show that the ancient Psalmist was right. Our cells are tiny but amazing. Dr. Gauger goes on to say:

One last thing -- the ribosome is also self-correcting. As the protein advances, the ribosome double-checks its work, and if it notices a mistake, it backs up to correct the error, like I had to do as I typed this sentence.

Suffice it to say that the genetic code, and the fidelity of its replication, transcription, and translation, are obviously very important, considering all the error correction that goes on, and they are interdependent, highly optimized processes that are essential to life. At the very center of these processes is this mystery: which came first, the protein or the DNA? And how was the link between DNA and protein established? Some say RNA came first, but RNA is inherently unstable, easily degraded and limited in its chemical abilities. So the problem remains unsolved.”

It is no accident that Dr. Gauger’s article is called Mystery at the Heart of Life.

Materialists/naturalists would need many miracles to solve that enigma but their worldview does not have room for a miracle maker.