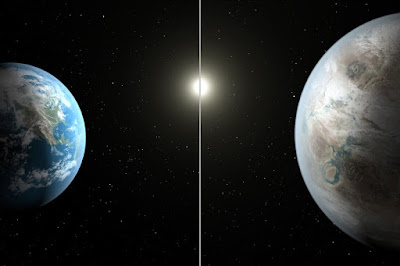 An artist’s impression of Kepler 452b (right). Image courtesy of NASA/JPL-Caltech/T. Pyle.


In recent years, NASA has been busy looking for alien life. Every now and then it has announced the discovery of something very spectacular.

In 2010 it was the discovery of a bacterium that was supposed to thrive on arsenic. It was a false alarm.

NASA has a rather suspicious record of “firsts”. Two of its life-friendly exoplanets (Gliese 581d and Gliese 581g) might not even exist though this hasn’t kept artists from imagining what they might look like.

It reminds me of the hype that often follows the discovery of a fossil that is supposed to belong to one of our long-lost ancestors. However, once more facts start coming in, the discovery turns out to be a disappointment. Ida was presented as our grand aunt, but it soon became obvious that she was something entirely different.

This time NASA announced the discovery of Kepler 452b that orbits its sun in the constellation Cygnus some 1400 light years away. Assumed to be a rocky planet, its diameter is 60 per cent larger than the Earth's.

With a year lasting 385 days, it seems to resemble an oversized Earth. However, we know next to nothing about what the planet is really like. Life needs a lot more than a place in a potentially habitable zone.

After all, Venus and Mars are in the Sun’s habitable zone and look how habitable they are.

Obviously, much more is needed, such as a big moon to keep the oceans alive. The Earth is fine-tuned for life in every way.

In contrast, many exoplanets are weird. They are not at all like Earth.

Earth was made to be habitable. As we know, life only comes from life. It does not pop into existence by chance from non-life anywhere in the cosmos.