The Oldest Rocks in the World? 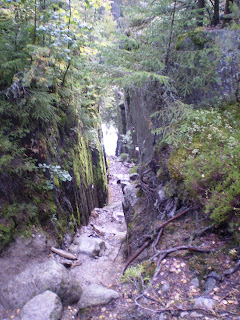 The Helvetinkolu Gorge in southern Finland. Estimates for the age of these rocks vary by a factor of over ten, from 150 million to 1.9 billion years.

A group of geologists claims they have found the oldest rocks in the world. In a paper published in the journal Science they say that a piece of Nuvvuangittuq greenstone is 250 million years older than any known rock.

Samples taken from the rock were sent to the Carnegie Institute in Washington for a chemical analysis. The rocks were dated by the samarium-neodymium method. The age of the rocks ranged from 3. 8 to 4.28 billion years.

Don Francis, a professor of geology at the McGill University in Montreal, thinks 4.28 billion years is the most likely date.

The rock also contains ”a chemical signature” that may be evidence of life.

People often suppose that radiometric dating methods are reliable but they almost regularly give incongruous results. Radiometric methods do not measure age but the amount of certain isotopes. Researchers can never be absolutely sure of the original amounts of the isotopes and they also have to make several other assumptions. Thus, they have often had to re-date fossils, rocks and even caves.

In addition, the discovery of soft tissues in T. rex bones and of carbon-14 in diamonds weakens the belief in millions of years. Comets , Mercury’s magnetic field and Saturn's moon Titan also speak for a young solar system.

The belief in millions of years can be a very ideological issue especially for non-theists. The idea of an old earth is actually an assumption that saw daylight before the discovery of the earliest dating methods.