Time For a Green Bible? 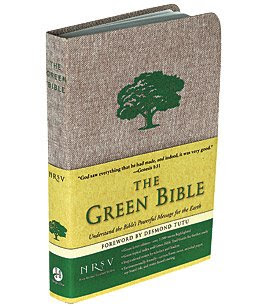 What has going green to do with the Bible? More than we would suppose, if we are to take a new Bible edition at face value.

While the text itself is not new, a Bible with an emphasis on the environment is a rather green idea. According to the publisher, the purpose of the book is “to show how we can care for and protect God's creation”.

HarperCollins has produced a new edition called The Green Bible. While many readers are familiar with red-letter Bibles, in which Jesus’ words are printed in red, the new Bible has over 1000 verses that “speak to God's care for creation highlighted in green”.

The HarperOne website states, “The Green Bible will equip and encourage people to see God's vision for creation and help them engage in the work of healing and sustaining it.”

The text follows the New Revised Standard Version (NRSV), which was first published in 1989. The NRSV is a revision of the older Revised Standard Version. While evangelicals might have preferred the New International Version (NIV), the Green Bible nevertheless reminds us of an important but often forgotten aspect of God’s revelation to mankind: According to Genesis 2:15 God entrusted man with the task of taking care of the Garden of Eden. Some Bibles, such as Luther’s now revised German translation, also speak of protecting the garden.

The Green Bible itself is printed on paper that is guaranteed to hail from “well-managed forests” with 10 per cent being made from recycled paper. Moreover, the ink is soy-based and the cover is made from cotton and linen.

In addition to the Bible text, The Green Bible has a foreword by archbishop Desmond Tutu and essays by other well-known Protestant and Catholic leaders such as Pope John Paul II and bishop N. T. Wright.

While the New Testament puts more emphasis on the Great Commission than on the stewardship mandate, The Green Bible reminds us that the entire creation is God’s creation and we should take good care of it.