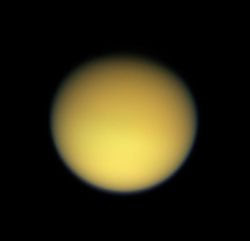 Saturn’s moon Titan is an enticingly mysterious world. The Huygens probe landed on Titan in January 2005 and has since then sent images and other data about the moon. A research team at Johns Hopkins University in Laurel, Maryland led by Ralph Lorenz has examined the images and drawn their conclusions about the data. Recently they published their findings in Geophysical Research Letters.

Titan’s surface is covered with lakes made up not of water but of liquid methane and ethane. The surface temperature of this big moon is approximately -178 °C, keeping the methane liquid though some of it condenses and forms clouds as it cools in the atmosphere. Thus the rain on Titan is liquid methane.

The solid surface of Titan is covered by dynes of a substance resembling sand. The dynes are made up of tholin that is composed of carbon, hydrogen and nitrogen.

Tholin has been named after the Greek word for ’muddy’. It is formed as sunlight splits the methane molecules apart and the atoms combine to form larger molecules. Laboratory tests have indicated that if this has continued for billions of years there should be much less tholin on Titan than there is. The researchers concluded that Titan’s present methanological cycle cannot have continued so long but must have begun much later.

Lorenz believes that earth’s hydrological cycle began early in the history of our planet but he suspects that Titan’s methanological cycle must be relatively young.

Although not all astronomers are willing to discard the idea of a 4.6 billion year old solar system, Titan’s tholin speaks for a much younger moon than was supposed.

The next step would be to admit that the entire solar system is only 6000 years old.

You can read about more evidence for a younger solar system here.
Lähettänyt bwanajoe klo 12:04