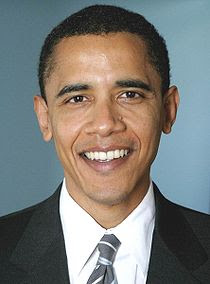 Senator Obama said St. Paul’s teaching on the consequences of rejecting the Creator is an “obscure passage in Romans”. This is a very odd claim. Paul was the greatest theologian of the Christian Church and Romans is probably the most comprehensive account of early Christian theology.

There is nothing obscure in Romans 1. Paul teaches that people intuitively know that there is a Creator God but have refused to acknowledge this. The New International Version puts verse 20 like this: “For since the creation of the world God's invisible qualities—his eternal power and divine nature—have been clearly seen, being understood from what has been made, so that men are without excuse. “

Nothing very obscure here. The next verse describes how people reacted to God’s revelation in nature: “For although they knew God, they neither glorified him as God nor gave thanks to him, but their thinking became futile and their foolish hearts were darkened.”

Paul says that men exchanged “the truth of God for a lie.” They were immoral, murderers and full of “every kind of wickedness”.

Senator Obama’s views of abortion and same-sex relations are diametrically opposed to what the Bible clearly teaches. In his second letter to the Thessalonians, Paul speaks about “the man of lawlessness” who will lead the rebellion against God. The Bible calls this man the Antichrist who, as his name implies, has an Anti-Christian agenda. Could he be Barack Obama?

The Old Testament Prophet Daniel says that this man “will speak against the Most High and oppress his saints and try to change the set times and the laws.”

History has already seen some little antichrists. The depression of the 1930s brought Adolf Hitler to power in Germany. Like Obama, he succeeded in hypnotising the masses, both Christians and non-Christians, to vote him to power. Hitler changed many laws – to the detriment of Jews, Gypsies and Slavs who were unfortunate enough to live within the clutches of the German eagle.

Keeping this in mind, Obama’s low view of Scripture and his opinion on abortion seem extremely disturbing. In some European nations, abortion was followed by euthanasia. Like in Nazi Germany, it is the defenceless that are persecuted.

While I do not think that Senator Obama is the Antichrist of the Book of Revelation, his views might make him into a little Antichrist that the Gospel writer John warned about in his first letter: “This is the last hour; and as you have heard that the antichrist is coming, even now many antichrists have come.”