Comets - The Ugly Ducklings of a Young Solar System 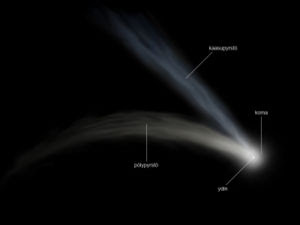 Hans Christian Andersen (1807-1875) wrote a fascinating tale about a swan that was born on a farmyard and thought it was a duck. The other ducks despised this ugly brown bird and chased it away. One day, however, Ugly Duckling saw some big white birds swimming in a pond. It expected them to drive it out, but they did not. Then the bird looked into the water and saw the reflection of itself: it was not a duckling after all but a beautiful white bird like the others, a swan.

Most of the time comets are like Ugly Duckling. The comet’s nucleus is a small dirty rock usually 1-10 kilometers in diameter consisting of ice, gas and dust. In some comets, this nucleus is surrounded by a huge hydrogen cloud, which may be up to 3 million kilometers wide. [1]

As the comet comes near the sun, a dramatic metamorphosis seems to take place: The sun’s heat “vaporizes some of the icy nucleus or head and sunlight reflects from the vapor. Solar wind pushes the vapor in a direction away from the Sun to form the comet's tail. For this reason, comet tails generally point away from the Sun.”[2]

Comets can be roughly divided into two categories: long-term comets, which orbit the sun in more than 200 years, and short-term comets, with an orbital period of 200 years or less. Some of them are so spectacular that they were though to augur doom. For instance, in 1066 Halley’s Comet preceded the Battle of Hastings, in which William the Conqueror defeated England’s Saxon king Harold.[3]

Many comets have elliptical paths that bring them very close to the sun. A comet loses much of its material each time it approaches the sun.[4] It has been estimated that a comet will loose all its mass in under 100 000 years.[5] This is a serious problem for the secular view of a 4.6 billion year old solar system. If the solar system were that old, we should not see any comets.

But this has not caused believers in million of years to discard their theory. They have set their hopes on a hypothetical stretch of space called the Oort Cloud.[6] They believe that this spherical “cloud”, which is supposed to extend up to three light years from the sun,[7] houses millions of frozen comets that eventually find their way into an orbit that brings them closer to the sun to replace the ones that have been destroyed.[8] The Oort Cloud is thought to provide long-term comets. The biggest problem with this explanation is there is no observational evidence for the existence of this cloud.[9] Creationist astronomer Dr. Danny Faulkner suggests that the whole idea of the Oort Cloud “is not bad science, but non-science masquerading as science. The existence of comets is good evidence that the solar system is only a few thousand years old.”[10].

The Kuiper Belt has been proposed as a potential reservoir for short-term comets. It extends from Neptune’s orbit (ca 30 astronomical units or AUs[11]) to about 50 AU from the sun.[12] However, most of the objects in this area which lies beyond Neptune’s orbit, are tens of times bigger than comets.[13] These so-called Trans-Neptunian Objects (TNOs) include the recently discovered Eris (2003UB313) and Sedna (90377), which might be classified as dwarf planets. However, when compared to comets, they are giants. In order to replenish the comet supply, there should be millions of them but only 1026 TNOs have been found.[14]

There is not enough material in either the Oort Cloud or the Kuiper Belt to supply the solar system with the number of comets that old earth supporters desperately need. Genesis 1:14-19 records that the heavenly bodies we see in the night sky were created on Day Four. The genealogies of the Bible indicate that this occurred about 6000 years ago.

The Ugly Ducklings of the solar system are not portents of doom. The message they bring is altogether different. Together with other celestial objects they “declare the glory of God” (Ps. 19: 1). They are amazing evidences for a young solar system.


1] Anatomy of A Comet. http://www.nasm.si.edu/ceps/etp/comets/comet_anatomy.html
[2] Ref 1.
[3] Sarfati, Jonathan. 2003. Comets: Portents of Doom or Indicators of Youth? Creation 25:3, 36-40, June 2003. http://www.creationontheweb.com/content/view/141.
[4] The loss can be tremendous. For instance, “More than 1000 tons of this dust escaped from the head of comet C/1973 El (Kohoutek) every second, and formed a ‘dust tail’ ". Ref. 1
[5] Lisle, Jason. 2005. What Does the Bible Say about Astronomy? Answers in Genesis booklet.
[6] Faulkner, Danny. 2001. More problems for the ‘Oort comet cloud’. TJ 15:2, 11, August 2001.
[7] Ref. 3.
[8] The gravitational impact of other stars is occassionally thought to disturb these sleeping comets and knock them into orbits closer to the sun. (Faulkner, Danny 1997. Comets and the Age of the Solar System. Technical Journal 11:364–273, December 1997).
[9] While some astronomers have suggested that the dwarf planet Sedna, discovered in 2003, is too far from the sun to be a Kuiper Belt Object, they argue that it is actually the first object to be discovered in the Oort Cloud. (Wikipedia. 90377 Sedna. http://en.wikipedia.org/wiki/90377_Sedna). But Sedna comes to within 76 Astronomical Units from the sun, so such a classification would involve stretching definitions quite a bit since Oort Cloud objects were not expected to be so “close” to the sun.
[10] Ref. 6.
[11] One Astronomical Unit (AU) is the average distance from the Earth to the sun or approximately 150 million kilometers or 93 million miles.
[12] Kenyon, Scott J and Benjamin C. Bromley. 2004. Stellar encounters as the origin of distant Solar System objects in highly eccentric orbits. Nature 432, 598-602 (2 December 2004). http://www.nature.com/nature/journal/v432/n7017/abs/nature03136.html
[13] “The biggest surprise of the Hubble search is that so few small Kuiper Belt members were discovered. With Hubble's exquisite resolution, Bernstein and his co-workers expected to find at least 60 Kuiper Belt members as small as 10 miles (15 km) in diameter — but only three were found.” (Farthest, Faintest Solar System Objects Found Beyond Neptune News Release Number: STScI-2003-2. http://hubblesite.org/newscenter/archive/releases/2003/25).
[14] They include Pluto and its three moons. See http://www.boulder.swri.edu/ekonews/issues/past/n050/ekonews050.pdf.