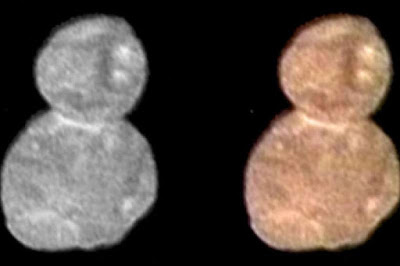 NASA’s spacecraft New Horizons reached an objective in the Kuiper belt known as Ultima Thule. As it passed within 3500 kilometres of the small rock’s surface at a speed of 14 kilometres per second, it took a few photographs.

The object, officially known as 2014 MU69, is 6.6 billion kilometres away from and it is based on too rocks. "Ultima" (the larger lobe) and "Thule" are red.

New Horizons investigator Jeff Moore said that because the two lobes show no obvious signs of damage from a collision, they probably hit one another slowly, at about a walking pace. “If you had a collision with another car at those speeds, you might not even bother to fill out the insurance forms,” he said.

How could these rocks cling on others for 4.5 billion years ago, since the beginning of time for our solar system? It takes great faith to explain this.

We recently heard that Jupiter’s m.oon Juno might be young too
.
We also heard that Saturn was not so old as scientists told us.

This is not the first time researchers think that Saturn’s rings are young or that Saturn looks young.