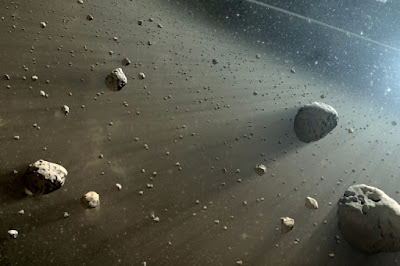 Naturalistic origin of life enthusiasts have set their hopes on meteorites as a likely breeding ground for the ingredients needed for life.

A paper published recently in the journal Science Advances examines the chemical composition of two meteorites that fell to Earth.

“They … contain both liquid water and a mix of complex organic compounds such as hydrocarbons and amino acids,” a news release issued by Berkeley Lab says.

It might be an understatement to say that the Berkeley folks are exited:

“[The paper] provides the first comprehensive chemical exploration of organic matter and liquid water in salt crystals found in Earth-impacting meteorites. The study treads new ground in the narrative of our solar system’s early history and asteroid geology while surfacing exciting possibilities for the existence of life elsewhere in Earth’s neighborhood.”

However, they might probably need to consider the lesson provided by a can of sardines, which has all the ingredients that life needs, but for some reason the contents are as dead as dead can be.

Much more than just the necessary ingredients are needed for life to suddenly pop up.

The latest scenario is no more credible than the previous (failed) ones, including those that invoke Saturn’s moon Enceladus, Jupiter’s moon Europa, a synthetic enzyme, cosmic rays or molecular midwives, or a plethora of other suggestions.

After all, life only comes from life, and it has to be created.