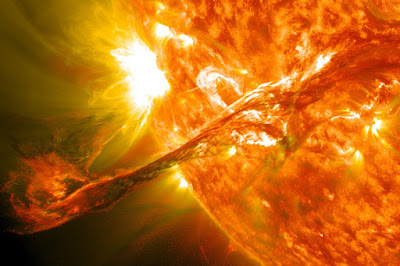 Solar flares can certainly kill, but scientists who subscribe to the naturalistic worldview are setting their hopes on them.

Avi Loeb at Harvard University and his colleagues simulated a solar flare that hit Mars with high-energy protons. They believe this might create the building blocks of life.

Here we have a speculative scenario in which raw energy magically turns into life, as long as they are given a few billion years to sort things out.

It has the same problem as all other naturalistic origin of life hypotheses, regardless of what they invoke or rely on, for instance, meteorites, Saturn’s moon Enceladus, Jupiter’s moon Europa, a synthetic enzyme, cosmic rays or molecular midwives.

The problem is that they cannot produce life.