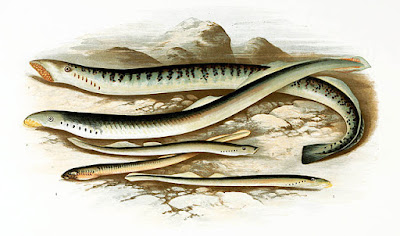 Hagfish is a bizarre living fossil that can tie itself into a knot.

It has resisted the urge to evolve for “300 million years.”

Recent research shows it also has a secret weapon against predators such as sharks (that likewise are living fossils).

A paper published in the Journal of the Royal Society Interface gives some background information:

“Hagfishes defend themselves from fish predators by releasing large volumes of gill-clogging slime when they are attacked. Slime release is not anticipatory, but is only released after an attack has been initiated, raising the question of how hagfishes survive the initial attack, especially from biting predators such as sharks.”

So, how do they manage to survive?

“The loose attachment of hagfish skin to the rest of the body and the substantial ‘slack volume' in the subcutaneous sinus protect hagfish musculature and viscera from penetrating teeth.”

Even in a fallen world groaning from of the dire consequences of Adam’s sin, God cares for animals, even hagfish.