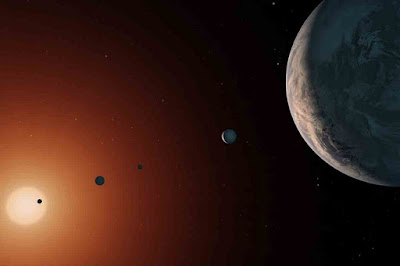 The TRAPPIST-1 planets orbit a cool red dwarf star. It is no secret that such stars are instable and prone to produce deadly flares.

Moreover, all TRAPPIST-1 planets are most probably tidally locked (with their same side always facing their sun), making life practically impossible.

However, this has not put an end to wishful thinking. For instance, an article in New Scientist suggests:

“The outer planets of the TRAPPIST-1 system might be better for life than we thought. Their cores are stretched by gravity, which generates heat, and there’s a possibility these exoplanets have atmospheres, so the outermost planets could be warmer and wetter than we thought, maybe even with air.”

The article relies on a number of unknowns, and is mostly inspired by wishful thinking, such as the power of tidal forces to “stretch and flex the planets’ cores enough to heat them from the inside.”

Most exoplanets are more or less weird. For instance, superfast spinning stars show that our Sun is special – and so is Earth.