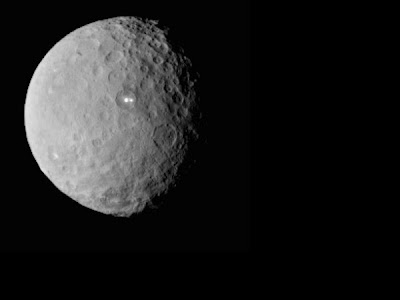 A bright spot on Ceres might challenge the assumed age of the solar system. Image courtesy of NASA/JPL-Caltech/UCLA/MPS/DLR/IDA).

It takes strong faith to believe in the preservation of liquid water and even of ice for billions of years. At times, it requires creative explanations that are certainly not backed up by the facts.

But there’s little else that the advocates of naturalistic /materialistic processes can invoke.

In recent years, we have seen a remarkable increase of facts that speak for a biblical age (i.e. thousands instead of billions of years) of the solar system. (You can see details here, here, here, here, here and here.)

Now, NASA’s Dawn spacecraft may have discovered water vapour spewing from Ceres, the largest object in the asteroid belt. In any case, analyses show that the dwarf planet is far from being dead.