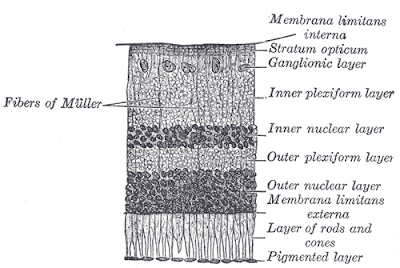 A cross section of the retina. Image courtesy of Gray's Anatomy of the Human Body (1918).

Richard Dawkins and other evolutionists have repeatedly claimed that the human eye is an example of bad design. He asserts that no engineer could ever have invented the inverted retina. He dismisses it as poor design.

However, recent research has indicated that he is wrong. Instead of being designed poorly, the eye is an example of superb design.

Eye experts have been saying that for years, but Dawkins has not listened to them.

A paper that will be presented on Thursday March 5 at the meeting of the American Physical Society will finally lay the bad design argument to rest. An ErekAlert! report quotes Professor Erez Ribak at the Technion – Israel Institute of Technology, as saying:

"The retina is not just the simple detector and neural image processor, as believed until today. Its optical structure is optimized for our vision purposes."

If something is optimised, it obviously cannot be designed poorly.

The report went on to say:

“Previous experiments with mice had suggested that Müller glia cells, a type of metabolic cell that crosses the retina, play an essential role in guiding and focusing light scattered throughout the retina.”

Professor Ribak and his colleagues tested this idea.

Unfortunately, the ErekAlert! report began with bowing to Darwin:

“From a practical standpoint, the wiring of the human eye - a product of our evolutionary baggage - doesn't make a lot of sense. In vertebrates, photoreceptors are located behind the neurons in the back of the eye - resulting in light scattering by the nervous fibers and blurring of our vision.”

It would have been more honest to admit that some scientists have not understood why the eye is wired the way it is.

In any case, bad eye design is a bad argument that no informed and /or honest evolutionist should use.