Mudskippers: The Superfast Evolution of a Darwinian Just So Story 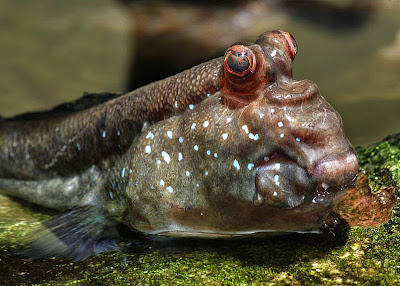 Evolution stories tend to evolve. At times, the evolution is extra fast, as in the recent case of mudskippers, as reported in Nature.

“Mudskipper fish (Periophthalmus barbarus) use water bubbles as a 'tongue' to feed on land. The finding hints at how other animals might have evolved tongues as they made the transition from aquatic to terrestrial life.

Krijn Michel at the University of Antwerp in Belgium and his colleagues used high-speed video and X-ray imaging to study the feeding behaviour of various animals. They found that when the mudskipper eats on land, a bubble of water held in its mouth protrudes out and touches food before its jaws close.”

“Amphibious fish that feed on land use water held in their mouths to help them grab and manipulate their prey. The unusual feeding behaviour of mudskippers (Periophthalmus barbarus) could shed light on the evolution of sea-dwelling animals into terrestrial ones.”

Thus, in just one short week, “could shed light on the evolution” becomes “might have evolved tongues.”

While mudskippers eat on land, their feeding behaviour does not lend support to the Darwinian frog-to-prince hypothesis.

It might be advisable to remember what Mark Twain said:

“There is something fascinating about science. One gets such wholesale returns of conjecture out of such a trifling investment of fact.”