Chameleons Use a Smart Method to Change Colour 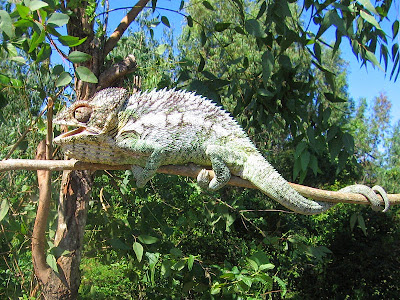 Chameleons use a smart method to change their colour. Image courtesy of Yosemite, Wikipedia.

Researchers are increasingly discovering smart design features in many animals and plants.

Recently, they found out how panther chameleons change their colour.

“Scientists always assumed that chameleons changed their appearance by making different colours flowed through their skin, but the reptiles actually have a much smarter method. They rapidly rearrange tiny crystals in their skin so that they reflect different wavelengths of light. ‘Essentially, the crystals act as a selective mirror,’ says Michel Milinkovitch of the University of Geneva in Switzerland, whose team made the discovery.”

The article explains how the little reptiles do it:

“Milinkovitch's team examined chameleon skin under the microscope and found that the cells contain crystals of guanine - one of the four DNA bases - in highly regular grid-like arrangements. Each of these cells, called superficial iridophores, contains hundreds of thousands of crystals.

The researchers then used computer simulations to show that, in theory, simply by altering the distance between the crystals their arrangement could reflect any colour of visible light.”