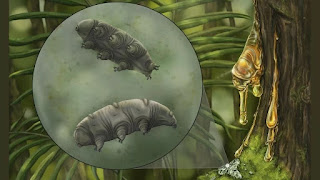 Evolutionist think that they have found a fossil tardigrade that hails from 16 million years  ago, , They have discovered  it in amber.

Tardigrades are also known as water bears or moss piglets.  They are famous for their  survival skills.

As reported in the in the journal Proceedings of the Royal Society B: Biological Sciences, the newly discover tardigrate was found in theDominican Republic, they are taught to be from theMiocene epoch  (23 million to 5.3 million years ago9 and are very well prseserved