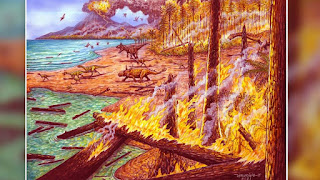 Evolutionists believe that some75 millions years agoa75 millions uears ago, Antarctica had fires, they believe that this took place when dinosaurs still roamed the Earth .

According to a new study, published online Occtober  20 in the journal Polar Research finds. that Antarctica's James Ross Island was home to a temperate forest of conifers, ferns and flowering plants known as angiosperms, as well as to a slew of dinosaurs. But it wasn't a total paradise; ancient paleo-fires burned parts of those forests to a crisp, leaving behind charcoal remnants that scientists have now scooped up and studied.

They say that this happened during the late Cretaceous period (100 million to 66 million years ago), one of the warmest periods on Earth,

This study study brings to mind Noah’s Flood that ravaged the Earth 4,500 years ago. Before that, Antartica was probably  non existen.

But they have found dinosaur bones in Canada as well as petrified forest in Antartica.