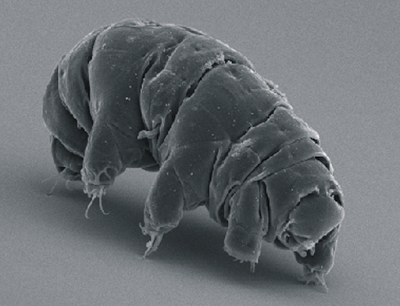 They are already found in the Cambrian strata “530 million years” ago, which means that evolutionists see them as one of the oldest kinds of living fossils.


Known as water bears for their somewhat ursine appearance, they seem to thrive in extreme conditions, both cold ( -272 °C or -458 °F) and hot (150 °C or 300 °F). Moreover, they can fast ten years without even taking in water, and still survive.

There’s more. A tardigrade found by Japanese scientists in the Antarctic in 1983 was defrosted and it gave birth after being frozen for 30 years.

Recently, a new tardigrade species was found in the parking lot of an apartment building in Japan. Dubbed Macrobiotus shonaicus, it is perhaps even weirder than others.

Live Science points out a bizarre trait in this sturdy creature:

“Perhaps the weirdest aspect of M. shonaicus, though, is its eggs. The spherical eggs are studded with miniscule, chalice-shaped protrusions, each of which is topped with a ring of delicate, noodle-like filaments. These features might help the egg attach to the surface where it is laid, [tardigrade expert Kazuharu] Arakawa said. “

The tardigrade’s traits speak of a Designer who skilfully made every living creature.