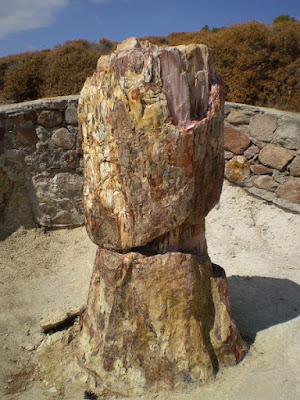 Petrified trees can be seen on many continents. Here’s one on the Greek island of Lesvos.

We would most probably not expect to find petrified trees in Antarctica, even though researchers had discovered pollen on the now frozen continent.

But now evolutionists have to resort to creative storytelling to account for a fossilised forest they found there.

An article on Live Science suggests:

“From about 400 million to 14 million years ago, the southern continent was a very different, and much greener place. The climate was warmer, though the plants that survived at the low southern latitudes had to cope with winters of 24-hour-per-day darkness and summers during which the sun never set, just as today.”

They found “the oldest polar forest on record”. They believe that it’s 280 million years old. It is mostly composed of Glossopteris trees that resemble today’s Bald Cypress.

It’s hard to believe that the trees are as old as they assume:

“The plants are so well-preserved in rock that some of the amino acid building blocks that made up the trees’ proteins can still be extracted, said [paleoecologist Erik] Gulbranson, who specializes in geochemistry techniques. Studying these chemical building blocks may help clarify how the trees handled the southern latitudes’ weird sunlight conditions, as well as the factors that allowed those plants to thrive but drove Glossopteris to its death, he said.”

The global flood of Noah’s day is the most logical explanation for these discoveries. It has left marks all over the world, including fossil graveyards and geological formations.