The Fractal-Like Structure of Human Bone Speaks of Intelligent Design 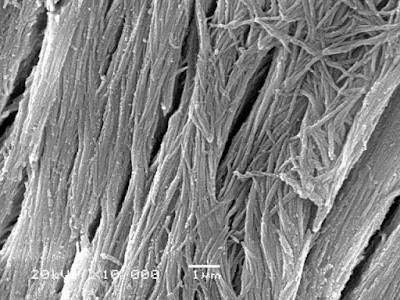 Collagen in bone looks like this, but there’s much more in our bones. Image courtesy of Sbertazzo, CC BY-SA 3.0.

When French engineer Gustave Eiffel designed the tower that bears his name, he copied the structure of the human femur.

Last year (2017) Science reported on an invention called supersteel that is based on human bone.

The bone’s inner structure makes it both lightweight and hardy. For a similar reason pterosaurs were efficient fliers - and birds still are.

Recently, Science published a paper by Roland Kröger of the University of York and colleagues at Imperial College London. They used electron microscopes to look at the nanostructure of human bone.

“The authors believe that the fractal-like structure of bone is one of the key reasons for its remarkable attributes,” Science Daily concludes.

Fractals are seen everywhere in nature. They suggest that there’s nothing haphazard in creation, but every detail is designed carefully.

“Besides the large number of nested structures in bone, a common feature of all of them is a slight curvature, providing twisted geometry. To name a few, the mineral crystals are curved, the protein strands (collagen) are braided, the mineralized collagen fibrils twist, and the entire bones themselves have a twist, such as those seen in the curving shape of a rib for example.”

This does not look like the work of the blind watchmaker that our old friend Richard Dawkins used to be so fond of.

University of York. 2018. Revealing the remarkable nanostructure of human bone. Science Daily. (3 May).