Evolution Can Explain Cancer But Hardly Anything Else 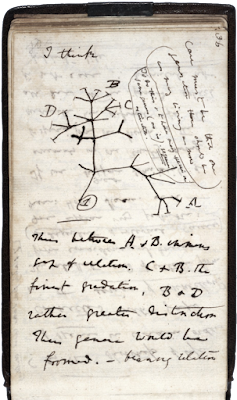 Charles Darwin’s famous “I Think” sketch, 1837. Public domain. It might explain cancer but hardly anything else.

Nothing in Biology Makes Sense Except in the Light of Evolution is the title on an essay Theodosius Dobzhansky (1900–1975) wrote for the American Biology Teacher magazine in 1973.

Recently, Mel Greaves, who seems to be a firm believer in Darwinian medicine, wrote an article entitled Nothing in cancer makes sense except…

The name is no accident, as Greaves references Dobzhansky’s essay and tries to persuade his readers that evolution can explain cancer.

It is perhaps a very fitting meaning of evolution, as even in theory, Darwinism can only break things and never make them.

Our cells have several strategies for getting rid of rogue or unwanted growth that could cause cancer, for instance apoptosis or programmed cell death and phagocytosis or the process of self-eating, where cells called macrophages or ‘big eaters’ (μακρος, makros ‘large’ and φαγειν. phagein ‘eat’) devour damaged cells.

These mechanisms are the opposite of Darwinian evolution.

This is not the first time Darwinists invoke cancer as an explanation for evolution.