Relicts of Noah’s Flood and the Ice Age in Saharaomo sapiens, the Neanderthals, Homo erectus 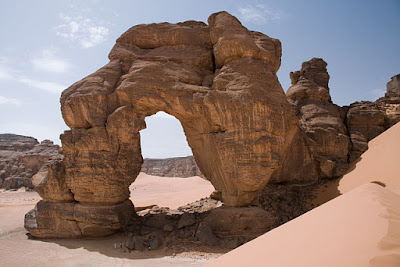 The Sahara was once wetter. Image courtesy of Luca Galuzzi, CC BY-SA 2.5.

The Sahara desert was once a lot wetter place than it is today (although some parts got a brief snow cover recently).

It is very likely that this wet epoch followed Noah’s Flood, which obviously left the ground wetter than it is now, and the ice age that followed would also have kept moisture in the ground.

A paper published in the journal Nature Plants written by researchers from the universities of Huddersfield, Rome and Modena & Reggio Emilia finds evidence for cultivating and storing cereals.

According to Science Daily, “a chemical analysis of pottery from the site demonstrates that cereal soup and cheese were being produced.”

They believe that this was at a time (ca. 8,000 BC) when humans were supposed to be hunter-gatherers. The timing is way off by 4,000 years or so.

The Sahara also holds – or has held – other relics from the Flood, such as an imposing natural archway and a catfish fossil.