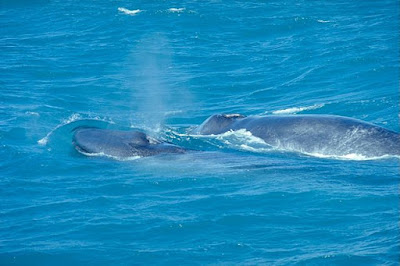 
Birds are not the only animals that like to sing. At least one fish species can also sing.

And there’s more. Natural Geographic reports on the singing skills of blue whales:

“The biggest animal to ever live is also the loudest, and it likes to sing at sunset, babble into the night, talk quietly with those nearby, and shout to colleagues 60 miles away.”

Previously. little was known about their singing, Now, “In the first effort of its kind, Ana Širović, an oceanographer at Scripps Institution of Oceanography in La Jolla, California, and her team scoured a collection of more than 4,500 recordings of blue whale sounds taken from underwater microphones at over a dozen locations over 14 years, from 2002 to 2016, in southern California. The researchers then synced the recordings with the movements of 121 whales that had been tagged with suction-cup trackers. What they learned challenged many assumptions about these noisy beasts.”

They discovered that males did most of the singing.

It’s practically impossible to invoke evolution in explaining why three very different kinds of animals – birds, fish and marine mammals – like to sing.

Convergent evolution would not be a viable explanation.