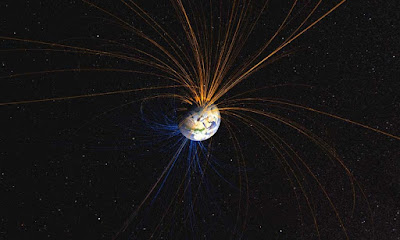 “For the past 160 years, the strength of the magnetic field has been decreasing at an alarming rate,” says a press release issued by the University. of Rochester.

University of Rochester professor John Tarduno and colleagues went to southern Africa to examine an area called known as the South Atlantic Anomaly.

They think that something spectacular is happening there.

“The magnetic field is generated by swirling, liquid iron in Earth’s outer core. It is here, roughly 1800 miles beneath the African continent, that a special feature exists. Seismological data has revealed a denser region deep beneath southern Africa called the African Large Low Shear Velocity Province. The region is located right above the boundary between the hot liquid outer core and the stiffer, cooler mantle. Sitting on top of the liquid outer core, it may sink slightly, disturbing the flow of iron and ultimately affecting Earth’s magnetic field.”

Research has shown that Earth had a magnetic field from the beginning.
.
The weakening of the magnetic field is a huge problem for those who believe in billions of years, so they have to believe that it is “a recurrent anomaly” and invoke magnetic reversals.

However, there is no known mechanism that could cause such reversals.