Woodpeckers Are a Darwinian Headache 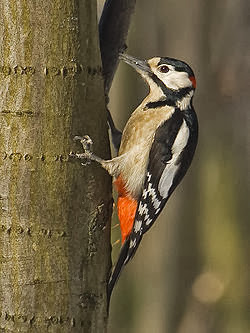 Woodpeckers are a Darwinian headache:

“A woodpecker hammering away at a tree experiences forces up to 1,400 times that of Earth's gravity, or 1,400 G's. To put that into perspective, humans can withstand about 8 G's of continuous momentum before eventually blacking out, and a sudden application of 50 G's would detach most of our organs. Even relatively small amounts of g-force in people can cause concussion, lingering pain in the neck and back, and red dots on the skin from ruptured capillaries — known as "G-measles" or "geasles" — according to Go Flight Medicine, a website for aviation and medical professionals,” Live Science explains.

Woodpeckers are designed to withstand hard knocks. They have “skulls with spongy layers — particularly in the front regions — that cushion their brains. Robust neck muscles also help to soften the impact, while thick inner eyelids protect their eyes.”

A new study suggests that a protein known as tau might “serve as a protective adaptation, providing a buffer around the birds' neurons that insulates them against harm.”

Evolutionists believe that the earliest woodpeckers arrived at least “25 million years” ago, but they could never have survived if their only option was to follow the Darwinian trial-and-error approach.

Weisberger, Mindy. 2018. Does All That Headbanging Leave a Mark on Woodpeckers' Brains? Live Science (5 February).