The Odds of Getting Proteins from the Primordial Soup Are Beyond Astronomical, NASA Acknowledges 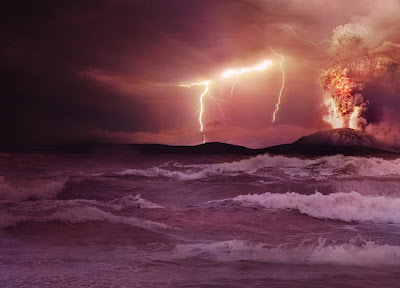 An artist’s impression of the early Earth. Image courtesy of NASA.

Scientists have previously acknowledged that the origin of proteins is “close to a miracle.”

Yet. without them we wouldn’t have life. An article in Astrobiology Magazine explains this naturalistic dilemma:

“Life relies on the intricately folded amino acid chains known as proteins for practically every chemical task. Proteins catalyze chemical reactions throughout the cell, stitch RNA strands together, transport molecules around the cell and control what enters and leaves through the membrane. A modern cell cannot be a cell without them.”

Evolution’s enigma is a lot more complex. It has to get DNA, proteins and RNA at the same time.

But according to a naturalistic/materialistic scenario, even getting proteins is practically impossible:

“Proteins pose a problem for scientists who study the beginnings of life… They are highly specialized and, compared to most molecules, they are enormous. The odds of such lengthy amino acid chains forming ‘out of the blue’ in life’s primordial soup are beyond astronomical.”

Trying to explain the nigh impossible, Andrew Pohorille, a senior astrobiologist at the NASA Ames Research Center, and colleagues used computer simulations to suggest a potential pathway for producing proteins.

They propose that the earliest protein was a lot smaller and less precise than today’s proteins. They call it the handyman of proteins.

There is absolutely no evidence for the existence of such a protein, however. Life is far too complicated to have arisen through naturalistic means.