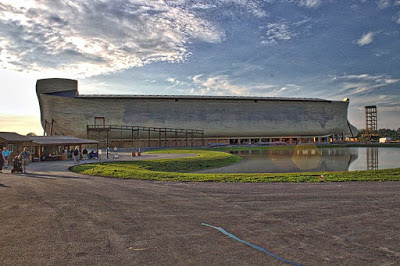 LGBT people are afraid of this ark. Image courtesy of Jameywiki, CC BY-SA 4.0.

Political correctness can easily lead to behaviour that can rather aptly be described as madness. A recent real life illustration has Canadian prime minister Justin Trudeau correcting a lady who used the expression mankind and replacing it by a more gender-neutral though imaginary word peoplekind.

No wonder then that #peoplekind has been immensely popular on Twitter, and Mr. Trudeau’s expression “We like to say peoplekind” has inspired new political correct versions of people (Nelson peopledela), comic heroes (Batpeople), places (Peoplehattan), fruit (peopledarin) and even a soccer club (Peoplechester United).

In the USA, however, the consequences of an all-inclusive policy has led to the suppression of conservative views. Recently, Ken Ham, President of Answers in Genesis-USA – was denied the chance to speak at the University of Central Oklahoma (UCO) though the presentation had already been approved by the University.

Then, however, a campus LGBT group protested, in fear that Mr. Ham would bring up the biblical view of marriage in his talk.

The censorship of Christian views used to be the norm behind the iron curtain, but until a few decades ago we would hardly have expected to bump into it in the west, where the local peoplekind are increasingly becoming ashamed of their rich Christian heritage.

In contrast, Answers in Genesis is certainly not ashamed of Jesus’ teaching. Its Creation Museum and Ark Encounter park will unashamedly proclaim the biblical truth.