Intelligent Navigation: Monarch Butterflies Use Cues from the Sun 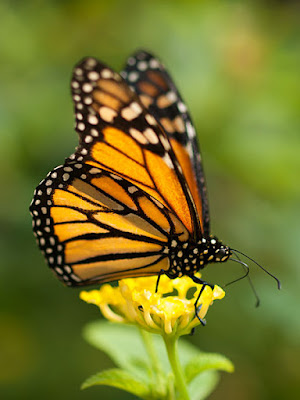 Despite its tiny head, the Monarch butterfly (Danaus plexippus) manages to migrate thousands of kilometres from the United States and southern Canada to Mexico.

They do so “in such an optimal, predetermined way,” says Professor Eli Shlizerman at the University of Washington. “They end up in a particular location in Central Mexico after two months of flight, saving energy and only using a few cues."

He is the lead author of a paper published in the journal Cell Reports on the Monarchs’ navigation skills. They found out that the butterflies depended on input cues they received from the Sun, using their eyes and antennae.

“The horizontal position of the Sun” and “keeping the time of day” give the butterflies “an internal Sun compass for travelling southerly throughout the day."

The researchers also designed a model system that imitates the monarchs’ navigation.

Butterflies are designed intelligently to be effective. They make use of build-in hi-tech. Previous research has disclosed that a magnetic compass guides the Monarchs’ flight.

Butterflies are a bad headache for evolutionists, as they challenge Darwinian evolution and their assumed evolution is a complete mystery.