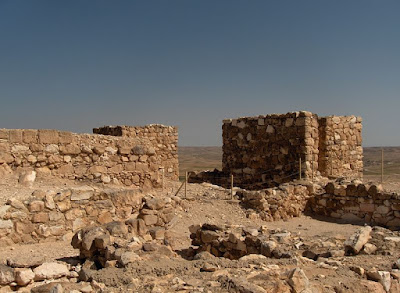 Inscriptions found in the desert fortress of Arad (above) suggest the Old Testament was written earlier than many assumed. Image courtesy of Acer11, Creative Commons (CC BY-SA 3.0).

Sceptics tend to believe that the ancient Israelites were mostly illiterate and that the Old Testament books were written rather late, several centuries after the events that they describe.

They assumed that the Bible was a collection of old nomadic tales that had little to do with real history.

We can now confidentially discard this view. An analysis of old inscriptions found in the desert fortress of Arad written ca. 600 BC suggests that most people could write at the time.

This is the take away message of a recent paper published in the journal Proceedings of the National Academy of Sciences (PNAS).

“Key parts of the Old Testament may have been compiled earlier than some scholars thought, suggests a new handwriting analysis of text on pottery shards.

The shards, found at a frontier fort dating to around 600 B.C., were written by at least six different people, suggesting that literacy was widespread in the ancient kingdom of Judah, said study co-author Israel Finkelstein, an archaeologist and biblical scholar at Tel Aviv University in Israel.

‘We're dealing with really low-level soldiers in a remote place who can write,’ Finkelstein told Live Science. ‘So there must have been some sort of educational system in Judah at that time.’

The writing shows that the kingdom had the intellectual resources to write and compile large chunks of the Old Testament during this period, he added.”

Arad was a remote desert fortress, so the soldiers stationed there were not expected to be very educated and yet all six – from the commander to the deputy quartermaster – were able to use proper spelling and syntax.

This should not be a big surprise. After all, the Mosaic writings emphasise the role of education in teaching the coming generations about God’s laws.

Archaeology has confirmed 50 real people in the Old Testament and several historical events described in the Bible, including catastrophes such as Noah’s Flood described in Genesis and the earthquake that devastated Israel during the time of the prophet Amos, ca. 750 B.C.