Bubble Nebula: The Heavens Declare The Glory of God 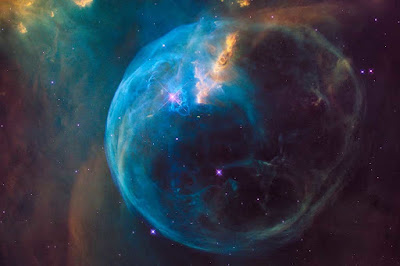 The Hubble Space Telescope has just given us a stunning view of the Bubble Nebula.

“The giant bubble, also known as NGC 7635, is a cloud of gas and dust 10 light years across, located in the constellation Cassiopeia. It was discovered by William Herschel in 1787 and has been partially photographed by Hubble before, but this is the first time the telescope has captured its full glory in a single image.”

The Bubble Nebula reminds us of the beauty we see in creation, and it’s not just us: The Old Testament writers also realised that only an awesome God could make such an awesome universe.

“The heavens declare the glory of God” (Psalm 19:1) and “He has made everything beautiful in its time,” (Ecclesiastes 3:11, English Standard Version).

We can see beauty everywhere, even in us. This challenges the indifferent Darwinian view of the cosmos.

Even in a world that suffers from Adam’s sin, we see amazing comeliness in both the small (such as a peacock spider) and the huge (for instance, galaxies).

We also enjoy wonderful colours and discern mathematical symmetry in all kinds of everything.