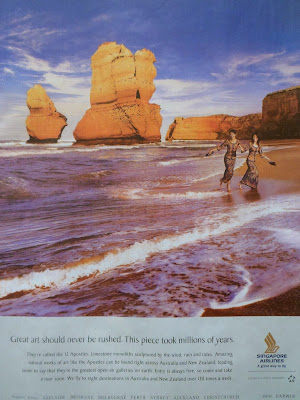 A recent advertisement for Singapore Airlines in Time (Europe) featured belief in millions of years.

Popular culture is awash with references to millions of years. A recent advertisement for Singapore Airlines in Time (Europe) describes Australia and New Zealand as “the greatest open air galleries on earth.”

“Great art should never be rushed. This piece took millions of years.” This is how they introduce a picture of limestone stacks standing in water in Victoria, Australia.

Known as the Twelve Apostles, they currently consist of eight stacks, some of which are roughly 50 metres high. In 2005, one of them collapsed, leaving the rest to withstand the water and wind.

However, it is far more logical to understand that the Apostles, like many other geological features, such as the Three Sisters and Heavitree Gap, are actually monuments sculpted by the global flood of Noah’s day that we can read about in Genesis.

A huge problem for the belief in millions of years is that erosion tends to break rocks in far less time. Just keep in mind what happened to Apostle #9 in 2005.

It is no longer with us.