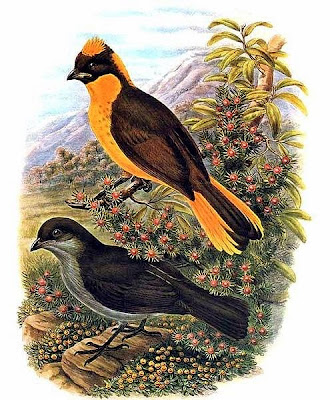 Bowerbirds are known for building intricate structures called bowers and decorating them. But they are much more versatile. They can imitate the calls of other birds, such as kookaburras and honeyeaters, as well as sounds that cats and even cars’ engines make.

There’s more. On a field trip in Papua New Guinea, researchers taped a male streaked bowerbird “belting out an extraordinary soundscape. It started with dogs barking and people chatting as they traipsed through the forest slashing at foliage, and continued with the sounds of machete strikes and a falling tree, complete with the rustle and shake of leaves and the great crash of it hitting the ground.”

This is amazing. Despite their tiny brains, birds are better toolmakers than chimps and crows, for instance, beat them in intelligence tests.

Birds have an amazing collection of design features. Feathers are light but almost never break before their time. Even the tiny hummingbird has awesome strength. Elegant design keeps the cormorant from getting wet.

Bird brained? Perhaps it’s time to cease using this expression. It doesn’t correspond to reality. Like most animals, birds were created to be intelligent.