Australopithecus deyiremeda: The Evidence for Lucy’s Relative Is Trifling 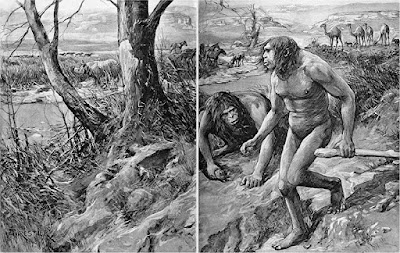 In 1922, the Illustrated London News featured this interpretation of the now infamous Nebraska man by Amédée Forestier. Image courtesy of Wikipedia.

There’s not much evidence for the latest hominin – a few teeth and two tiny pieces of the mandible or jawbone. But the earliest reports touted the find as a new human ancestor.

Found in Ethiopia, it already has its own species name Australopithecus deyiremeda although some experts are a bit more cautious, as the diversity within a species can be considerable.

Au. Deyiremeda is thought to be closely related to Au. Afarensis (a.k.a. Lucy) that many evolutionists revere as their grand-grand-grand etc. mother – or something like that. The assumed dates for both southern apes are almost identical, just over 3 million years.

Warning of the danger of extrapolating a bit too much from the evidence, Mark Twain wrote: “There is something fascinating about science. One gets such wholesale returns of conjecture out of such a trifling investment of fact.”

It might not be a bad idea to spare a few thoughts on some of the past announcements concerning our assumed ancestors. The evidence for Nebraska Man consisted of a single tooth.

Moreover, perhaps science journalists should keep in mind what J. Shreeve wrote in Discover magazine in 1990: ”Everybody knows fossils are fickle; bones will sing any song you want to hear.”