Ants Are Good at Mathematics 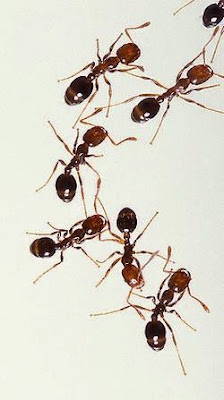 Who would have guessed that tiny ants could apply mathematics? An article in ScienceDaily states:

“When ants go exploring in search of food they end up choosing collective routes that fit statistical distributions of probability. This has been demonstrated by a team of mathematicians after analysing the trails of a species of Argentine ant. Studies like this could be applied to coordinate the movement of micro-robots in cleaning contaminated areas for example.”

Ants are not the only animals that display collective intelligence. Starlings fly in flocks of up to 300,000 birds and never seem to collide.

Some other amazing examples of animal intelligence or skills that challenge evolutionary explanations:

· Bees might be able to use a mind map when navigating.

· Zebrafish make their own sunscreen.

· The bowerbird can imitate practically anything it hears.

· Dogs are better learners than chimpanzees.

· A fox can be more intelligent (and not just cunning) than we’d expect.

· The octopus is an “eight-legged marvel”.

In a blind Darwinian world, we would not expect animals to be as intelligent as they are. Some have brains the size of a pinhead, and yet – as in the case of ants – their skills are amazingly complex. No wonder Proverbs 6:6 says: “Go to the ant, you sluggard; consider its ways and be wise!” (NIV).